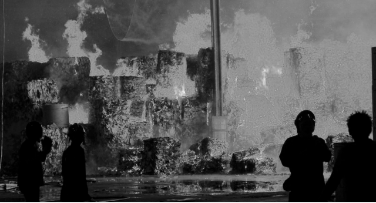 Over 8,000 cotton bales gutted in godown in India

WARANGAL: Over 8,000 cotton bales worth Rs 16 crore were gutted in a blaze at a godown belonging to State Warehousing Corporation at Kota Maisama Gandi in Geesgonda mandal on Friday. It took over seven hours for over 50 personnel and 12 fire tenders, including three from Hyderabad, to control the fire. The cotton bales belong to Ahmedabad-based LD Company and were being maintained by Mumbai-based National Bulk Handling Corporation (NBHC). The company and the warehouse o icials claimed they had no idea how the fire broke out. “We are looking into the reason for the fire. This is the first time it is happening in this godown,” said chief manager of NBHC company, S Venugopal. Divisional fire officer B Keshvulu, said a call was received around 9.50 pm on Friday saying a fire had broken out at one of the compartments of a godown stocked with cotton bales in the State Warehousing Corporation. Fire tenders  were rushed to the spot from Gorrekunta fire station. When it became difficult to handle the fire, fire tenders were called from Geesgonda and Huzurabad, he said. “Since the flames spread in the entire compartment, we broke the walls and started putting out the flames. But it spread to the opposite side making it difficult to control and hence higher officials were contacted in Hyderabad and three fire tenders were rushed to the spot. Once they reached the spot, the situation improved,” he said. The fire was brought under control by 4.30 am on Saturday and completely doused by evening.